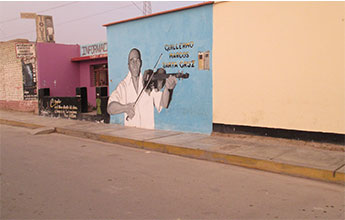 For more than 200 years, starting in the early 16th century, there was slavery in Peru, mostly people kidnapped from Africa who had first been brought to the eastern coast of South America and then taken to Peru. The descendants of these people are today’s Afro-Peruvians: people fully Peruvian but with a lively cultural tradition of their own which includes music and dance.

Afro-Peruvians live mostly in the coastal area of Peru - in the capital city of Lima, and in small towns to the north and south, all the way from Nazca in the south to Piura in the north. One town considered to be an important center of Afro-Peruvian culture is a couple of hours by car (or bus) south of Lima. Called "el Carmen," it maintains the important Afro-Peruvian form of the Christmas celebration called the "hatajos de negritos."

For the "hatajos de negritos," groups of men and boys dance through the streets accompanied by a violin, some of them carrying statues of baby Jesus and the Virgin Mary on their shoulders. These processions start on the night of Christmas Eve and end in the late morning of Christmas day. The participants rehearse for weeks to learn the steps they will use as they dance in the procession. In addition to dancing as a group, each of them dance individually before the image of baby Jesus...and in addition to the religious element, there is some friendly competition to see which one dances best!

Girls are not allowed to participate in these processions, although they certainly can watch them. But - they have their own, smaller, procession a few days after Christmas in which they dress all in white and dance with their own steps. 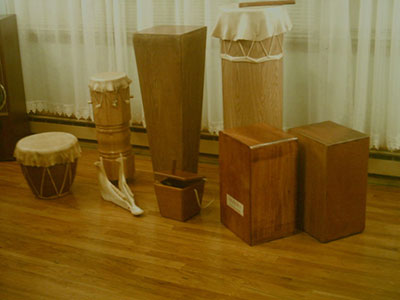 In the documentary, Huevito states that Afro-Peruvian percussion instruments are the cajón, cajita, quijada, zapateo, palmas, and guapeo. I’ll explain these here.

First, the cajón: it's that box that our stars are sitting on and playing in some of the performances, and that Lalo Izquierdo uses to demonstrate the meaning of some of the rhythms. The cajón is now also found in Latin jazz and even Spanish flamenco, where (according to flamenco guitarist Paco de Lucía) it was introduced via Afro-Peruvian performers – specifically, Caitro Soto and two of his friends (one of whom was Lalo Izquierdo).

The cajita is a small box. It developed out of the box that was used in church for people put their donations in!

The quijada, or quijada de burro, is a donkey’s jawbone which has been dried and cleaned to be used as a percussion instrument. Lalo Izquierdo plays one in the final performance number of the documentary. Most Afro-Peruvians are poor but resourceful, and have learned to make good use of whatever comes their way.

Zapateo is the fancy footwork that we see demonstrated at the beginning of the trailer. In Afro-Peruvian towns in the countryside, especially in the coastal area south of Lima, zapateo forms an important part of the celebration of Christmas, where it is performed in honor of Baby Jesus and the Virgin Mary. Now, it has also become something done in friendly competitions unrelated to any religious meaning.

Some people confuse zapateo with tap dance. Tap dance, however, came out of the cross-polination between African dance and Irish step dance during the Civil War while zapateo combines African tradition with Spanish dance.

Palmas: The word “palmas” in this context means hand-clapping, and palmas is the rhythmic hand clapping used in Afro-Peruvian music (and also, incidentally, in flamenco).

Next, we come to guapeo. Guapeo refers to the verbal encouragement that the audience, or another musician, will give to someone performing. (In flamenco, if I may be permitted to digress again, it is called jaleo.) In many forms of classical music, including “Western,” Persian, and southern Indian, you are expected to keep quiet in a performance out of respect for the performers. But in other musical forms, including Afro-Peruvian, silence indicates a LACK of respect, or at least a lack of appreciation. Guapeo is important to the performers – something to remember next time you go to a show!

There are other percussion instruments as well: the brand-new tracajón, used for accompanying marching groups in parades; a large variety of drums made out of hollowed-out logs; the checo - a very large gourd - and the angara - an even larger gourd.

Although it's not a percussion instrument, we should also mention the harp here, because it was used in the 19th and 20th centuries to accompany groups in parades; it has now been replaced by the tracajón. As you can imagine, carrying a harp and playing it at the same time was no easy task, but 18th century watercolors make it clear that this is exactly what was done, and Lalo Izquierdo remarks that one of his uncles was one of these marching harpists! Finally, a guitarist with his guitar would often accompany Afro-Peruvian processions and parades as well.

All in all, an impressive array of musical and percussion instruments.